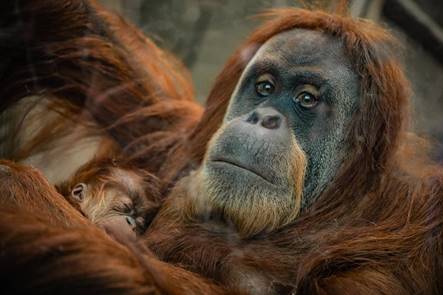 A critically endangered Sumatran orangutan has been born at Chester Zoo.

The new baby, a male, was safely delivered by mum Subis (32) at around 4:30pm on Thursday 14 November, following a nine month pregnancy.

Conservationists at the zoo now plan to select a fitting name for the adorable, brown-eyed youngster, who has been spotted clinging tightly to mum since birth.

The new arrival is a further success story for the acclaimed international breeding programme for the highly threatened species.

Sumatran orangutans are listed as critically endangered by the International Union for the Conservation of Nature (IUCN) with fewer than 14,000 surviving in the wild.

“The arrival of a new baby in the family of Sumatran orangutans is always cause for celebration. Subis is a great mum and she is being really attentive to her new born. The pair are inseparable as they get to know one another.

“The new arrival is especially important to the international breeding programme, which is providing a real lifeline for the species, given that Sumatran orangutans are so highly threatened. This new baby helps us to further highlight the mass-scale rainforest destruction that is occurring on the other side of the planet and raise some much needed awareness of the plight of their cousins in the wild.”

The Sumatran orangutan is one of the world’s most endangered great apes. Threatened by hunting and habitat loss because of illegal logging and the palm oil industry.

As the global human population has increased, there has been a huge amount of land clearance in South East Asia to make way for palm oil plantations. Palm oil is a highly efficient oil, which is found in more than 50% of supermarket products. As the demand for unsustainable palm oil intensifies, more and more orangutans are being pushed towards extinction.

“People can help these wonderful, charismatic animals while shopping in supermarkets, simply by, making sure they’re buying only products containing certified sustainable palm oil. It sounds like an incredibly small action, but this will create a snowball effect and send a message to suppliers that we demand change.

“Demanding sustainable palm oil could halt the destruction of rainforests across Sumatra and Borneo and help protect the remaining orangutans – together we can all help prevent their extinction.”

Conservationists at the wildlife charity earlier this year successfully made the city of Chester the world’s first Sustainable Palm Oil City. Working alongside restaurants, cafes, hotels, fast food outlets, schools and workplaces in the city, the zoo helped revamp supply chains to only include palm oil from sustainable, deforestation-free suppliers. Chester Zoo is currently the only zoo in mainland Britain which cares for Sumatran orangutans.