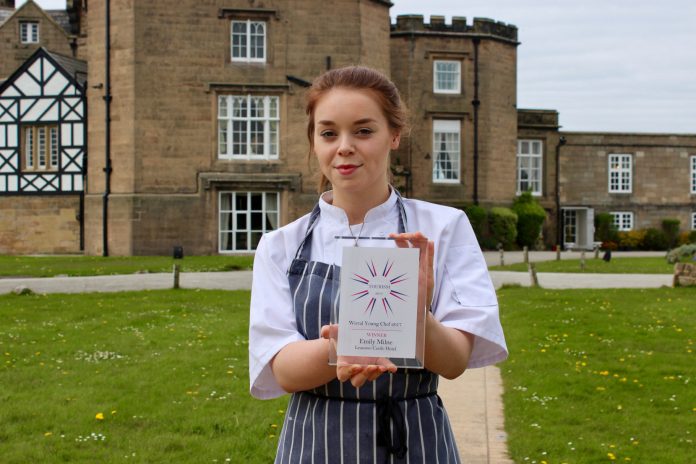 A pastry chef at Leasowe Castle has been crowned ‘Young Chef of the Year’ at the Wirral Tourism Awards.

The glittering awards ceremony, which took place at Floral Pavilion Theatre and Conference Centre, saw the arrival more than 250 tourism professionals; 14 of whom were recognised for their efforts in enhancing the region’s increasingly vibrant leisure and hospitality industry.

Emily said: “To have gained the title of ‘Young Chef of the Year’ at such an early stage in my career is brilliant. It was a real honour to have been amongst such a high-calibre of industry professionals who are collectively responsible for ensuring Wirral’s stance as a leading tourist destination.

“Ever since a young age, my dream was to become a chef as the art of all things culinary was instilled in me thanks to my mum’s home cooking. After undertaking two courses at The City of Liverpool College, I received a Level 2 Diploma in Professional Bakery and a Level 2 and 3 Advanced Technical Diploma in Professional Chefs (Patisserie & Confectionary). Having worked at Leasowe Castle for the past year, it is my role to head the pastry division and create a wide assortment of sweet and savoury nostalgic British home-comforts with a contemporary twist.”

Overlooking the idyllic Wirral Peninsula coastline, Leasowe Castle houses a duo of food and beverage amenities including the gloriously relaxed Brasserie 1593 and Knights Cocktail Bar. Open to residents and the general public alike, the social spaces combine modern-day culinary excellence with authentic historic charm that is synonymous with the local landmark.

General Manager of Leasowe Castle Mike Dewey said: “The team and I are thrilled that Emily has been recognised for her dedication and commitment to providing continuous culinary excellence.

“In line with the venue’s recent £3 million rebrand and refurbishment, Emily’s innovative ideas have certainly helped to shape the evolution of castle’s the foodie arm and perception as being a local dining and drinks destination with a difference. As we want the new look to be reflected in our offerings, we have invested time and training into the development of our entire kitchen staff so that they are equipped with the knowledge and expertise of delivering new techniques such as molecular gastronomy. Watch this space for something so unique…”