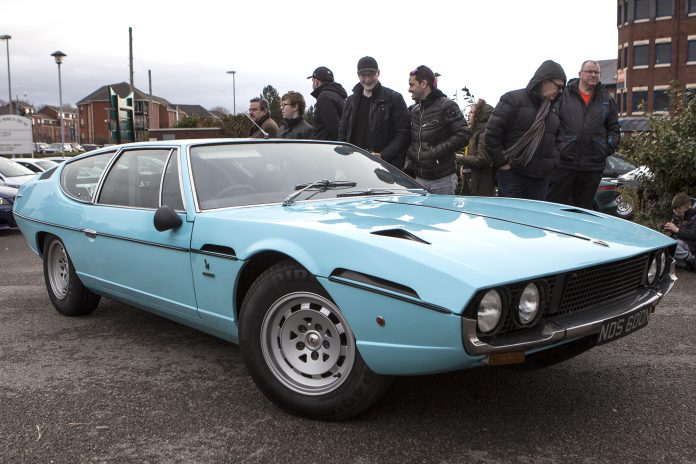 The first few weeks of January is always a slow start back to normality after a bustling and exhausting festive period, your motivation is zero, when you see the pile of work staring up at you.

Well, here at Cars and Coffee Liverpool we expected the same snail pace start with the first meeting to ease all the petrolheads into the year. Most of the precious metal we know are still tucked up nice and warm, waiting for the winter weathers to pass.

So imagine our surprise when a colossal amount of folks turned up at the Chung Ku Restaurant Liverpool to support this months Charity James Apter – Friendship Fund (Alder Hey Children Hospital for the trauma unit) raising £343.64 that day. Two new young crew members Jack and Emma Shum joining us for the first time. Kim Apter called them ‘Champion Bucket Shakers’.

Out of the colourful landscape of precious cars, shone two very rare and elegantly sculpted Italian Lamborghini Espada, owned by two  local lads from the Scotch Piper meet Paul and Cliff. These were a Grand Touring Coupé designed by Marcello Gandini at the style house Gruppo Bertone. Gandini, the Torino born designer son of an orchestra conductor, is probably one of Italy’s finest designers amongst Giorgetto Giugiaro (whom we’ve mentioned in a previous article – responsible for the VW Mk1 Golf, Delorean and Alfa Romeo Giulia GT amongst others).

The Espada was a four-seater GT, selling alongside the 2+2 400 GT and the mid-engined Miura. 1217 Espadas were made, making it the most successful Lamborghini model, until the expansion of Countach production in the mid-1980s. The Spanish  name “Espada” means ‘sword’, referring to the sword that the Torero use to kill the bull in the Corrida .

The Espada used a monocoque steel body. Suspension was fully independent, with double wishbones, coil springs, hydraulic shock absorbers and anti-roll bars, four wheel disc brakes. Twin fuel tanks held 95 l (25 US gal) of gasoline; the fuel cap was hidden behind a black cosmetic grille in the C-pillar, one of Gandini’s signature touches. Its 3,929 cc (240 cu. in.) V12 engine breathed through six Weber side-draft carburettors and 24 valves commanded by two chain-driven overhead camshafts per bank. The gearbox was mounted in block with the engine. Most transmissions were manual, and the Espada also introduced one of the first automatic transmissions able to transfer the torque of a large sporting V12. Try servicing her because she drinks 3 gallons of oil which is almost 15 litres!

Both these local cars originally arrived into the country in white with period red leather interior in 1974-5 at Portmann Lamborghini London at a staggering price of £13,000.  The calibre of people that drove these lavish models were – Princess of Monaco – Grace Kelly, who had a blue Espada, which opened the Formula 1 Grand Prix in Monte Carlo in 1969.

Two of these Italian Stallions graced our event, one in a flawless Lamborghini black and the other in a striking Miura pastel blue, which interestingly enough was previously owned by Bono from U2! Oh, and if you’re thinking… he did sell the car before he started trying to save the planet!

This is why we love Cars and Coffee Liverpool, it’s the nature of the meeting that unveils such stories and interesting vehicles. We try to generate interest for the experienced and educate the young. To get a mix of Hypercars parked next to a Classic car or may be persuade the retro hot hatch owners who talks to the luxury supercar driver. There seems to be a neutral ground, an even playing field for the quirkiest zero class system, whether you drive a McLaren 12C or a Fiat Panda 4×4.

What we notice is all motorists and enthusiasts have a similar language when it comes to cars. The pattern is always the same, stemming from memories of childhood. The poster car, the father or friend that owned such a vehicle or the first Motorshow car that engrossed you. It’s human nature, we as children aspire to do well, to work hard, fulfil a dream. We are not a normal car meeting, we are a community for all to share with parents, tourists, councillors, police, army officers to get involved.  To inspire and inspired by others!

Steve Gibson is one of the members who came to Cars & Coffee in a car he mostly built in his own garage. It is a 1988 Czech Skoda Estelle 130GL, a retro classic known for its poor build quality, terrible performance and hopeless reliability. A brand that was mocked with all the jokes known to man. But these are long gone now because in 1991 it was gradually privatised then in 2000 Skoda became a wholly owned subsidiary of the Volkswagen Audi Group. But previously Skoda Works was state owned during the days of the Communist government.

Škoda (then Laurin & Klement) factories were founded in 1896 as a velocipede manufacturer. In 1894, 26-year-old Václav Klement, who was a bookseller in Mladá Boleslav, Kingdom of Bohemia (today’s Czech Republic, then part of Austria-Hungary) because he was unable to obtain spare parts to repair his German bicycle.

Anyway, Mr Gibson has highly modified and improved the Skoda in every shape and form with his skills in the motoring industry. You could call it Audi Skoda Estelle 20v turbo 4-wheel drive, deceiving under the bonnet and chassis running gear but intimidating given away by the rally boxed arches you would find on a Lancia Integrale or BMW E30 M3. The talent, the enthusiasm, the skills, dedication and time spent is clear to see. The car needs to be appreciated in the flesh (hopefully he will be attending with another specially built car).

There is such an eclectic mix, who knows one day, a gentleman driving Steve McQueens Ferrari 250 GT Lusso will turn up? Who apparently lives in the Merseyside area, now for me, that’s inspiring!

See you on the 25th February, nice and early for the next meeting. 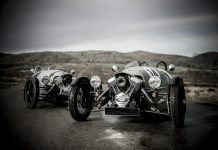