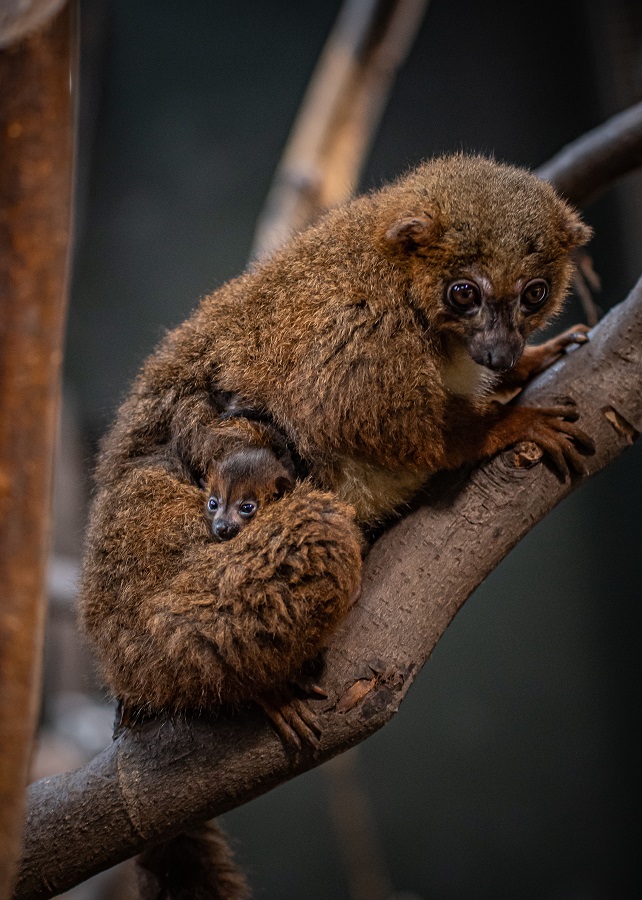 Adorable twin red-bellied lemurs – a species listed as vulnerable to extinction – have been born at Chester Zoo.

The tiny primates currently weigh just 70 grams each and will spend the first few months of life clinging to mum and riding around on her back, before gaining in confidence to branch off and explore on their own.

Red-bellied lemurs are one of the world’s rarest primates with their numbers having declined by more than 30% in recent years. An international conservation-breeding programme involving some of the world’s leading zoos is now playing a vital role in the efforts to secure the species’ future.

The world’s authority on the state of nature, The International Union for the Conservation of Nature (IUCN), lists red-bellied lemurs as Vulnerable and as a result, face a high risk of extinction in the wild.

Jessamine Smith, Primate Keeper at Chester Zoo, said:
“The birth of any red-bellied lemur is always a real boost for the conservation breeding programme, but to have twins born for the very first time at the zoo is incredibly special.

“Red-bellied lemurs are one of the few lemur species that form a monogamous couple, meaning that they pair up for life and live in a small family troop of mum, dad and their offspring. So far mum Aina and dad Frej are both doing a wonderful of job of caring for their new babies – they can often be seen snuggled up in mum’s fur and clinging tightly to her as she leaps from tree to tree.

“At the moment they’re absolutely tiny, but they develop really quickly and within a few months will be off exploring by themselves.”

Scientists report that Madagascar, the world’s most biodiverse island with wildlife that cannot be found anywhere else on the planet, has already lost up to 90% of its forests – leaving many species on the brink of extinction. Large-scale habitat loss across Madagascar continues to be the biggest factor in the demise of thousands of species, including the red-bellied lemur.

Lemurs are also hunted for food and persecuted for their occasional raids on crops, as well as being captured for the illegal wildlife trade.

Mark Brayshaw, Curator of Mammals at the zoo, added:
“Red-bellied lemurs are sadly undergoing a sharp decline in Madagascar meaning the safety net population found in leading zoos around the world is becoming ever more important. The arrival of these two new babies will help us continue to play a vital role in ensuring the species has a future.

“In tandem with this key international conservation breeding programme, our experts are also working in Madagascar alongside our field partners Madagasikara Voakajy. The teams are fighting to protect the remaining forests; home to thousands of species that cannot be found anywhere else on the planet. As part of this we’ve also been actively engaging with local communities and schools to educate younger generations about the importance of wildlife and healthy forest ecosystems – providing a much brighter future for the world’s most biodiverse island.”

In 2015, the Malagasy government established The Mangabe New Protected Area, co-managed by the zoo’s field partner Madagasikara Voakajy and the communities that live in the Mangabe region, providing a safe haven for nine species of lemur, as well as hundreds of other endangered species.

The new lemur twins can be found in the zoo’s walkthrough Madagascar lemur habitat, giving nature lovers the opportunity to walk among rare lemurs, while educating visitors on the work the zoo is carrying out in Madagascar.

It’s home to more than 20,000 animals made up from nearly 600 different species, many of which are endangered in the wild

The zoo also supports field projects in 20 countries around the world, as well as closer to home in the UK, preventing the extinction of highly threatened species

The zoo has a vital role in inspiring and educating people about the natural world and the impact humans have on it – creating and nurturing the conservationist in us all.

A new arrival at Chester Zoo