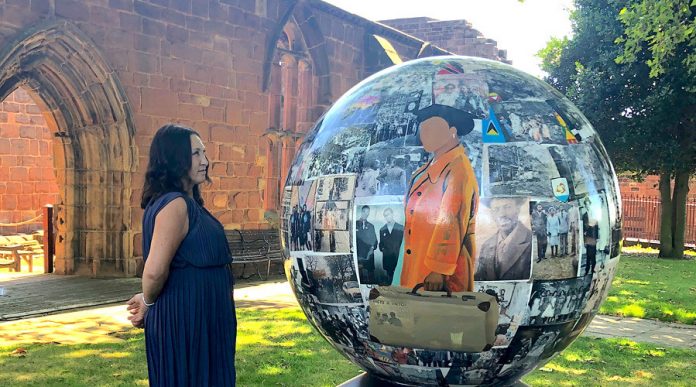 Running from 13 August to 31 October, the trail of globes across the region will include interplanetary installations in Wirral, Halton, Knowsley, Sefton and St Helens, as well as a walking trail of five large globes in Liverpool city centre.

Wirral Council Leader, Councillor Janette Williamson, said: “Our globe sits poignantly in the historic surroundings of Birkenhead Priory, and is a fantastic way to raise awareness about such an important subject. It’s a really creative way for the region’s communities and schools to engage with the globes and learn valuable lessons from our history.”

The globes will be at the centre of a broader learning and engagement programme, with schools, community groups, and cultural institutions from across the city region taking part.

The globe at Birkenhead Priory, titled ‘A Complex Triangle’, was designed by artist Jioni Warner.

Jioni said: “My globe highlights the experience of the Caribbeans who migrated to England between 1948 and 1971, known as the Windrush generation. The globe uplifts their stories and showcases how they paved a way to future generations, such as myself.”

The project forms part of the Liverpool City Region Combined Authority’s Race Equality Programme, which was established by Metro Mayor Steve Rotheram in 2020.