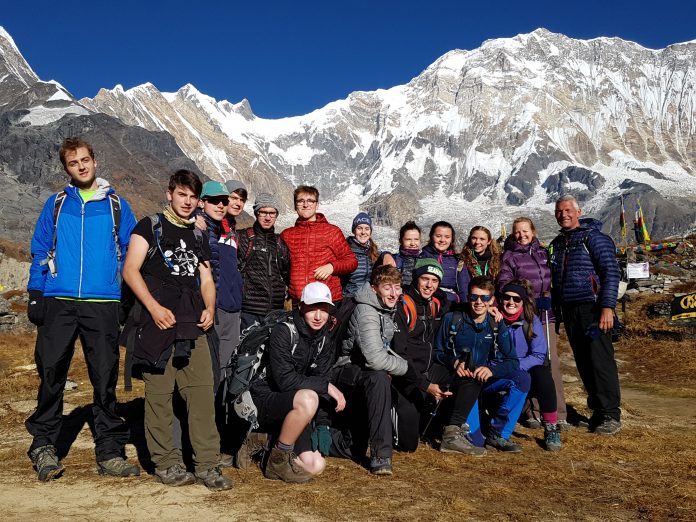 Students from Birkenhead School enjoyed a trip of a lifetime to Nepal in October half-term. During the course of the last year a group of fourteen sixth formers have raised nearly £15,000 to help contribute towards the building of six new classrooms at a Nepalese school in conjunction with the charity, So the Child May Learn.

During the trip the students trekked for nine days to Annapurna Base camp, an incredible 4130m above sea level, and then on to the village of Managau, where Lower Krishna Secondary School is based. Here the group had the opportunity to see how the money raised by their fundraising efforts was going to change the lives of so many Nepalese children.

The students also found time to formally open a new classroom block that has already been completed with money raised by the ‘So the Child May Learn’ charity, at Shree Pokra Secondary School. The School formalised the friendship between both schools by exchanging bonding gifts, Birkenhead School gave a wooden crest as well as the School flag and the Headmaster from Shree Pokra Secondary School presented the group with a framed photograph of their school and a Nepalese flag.

Lower Sixth Form student, Hannah Durband, spoke about her time in Nepal, “It was an incredible, life-changing experience. A highlight was when we woke up early to finish the trek to Annapurna Base Camp – seeing the sky go from pitch black to spotting the orange streaks of the sun appearing behind the mountains was breathtaking. Visiting the School was an emotional time and I remember the moment the children placed the marigold chains over our heads in thanks, feeling the weight of them all around our necks, it was such an overwhelming experience.”

David Edmunds, who organised the trip, commented, “This is not a trip I would have dreamed of organising 10 years ago but, having been on around 30 overseas School trips in my career, it was by far the most challenging and also the most rewarding with every single student playing a significant part in that.”

Paul Vicars, Headmaster, said, “Our 14 Sixth Formers should be incredibly proud of what they have achieved. Ending their trip visiting the site where the school is being built, thanks to all their hard work and fundraising, will be a memory that will stay with them forever. This life-changing experience is a perfect example of how we educate our pupils beyond the confines of the curriculum and help shape our students into confident, socially aware members of the community.”

The students are now sharing memories and highlights of their incredible trip with fellow pupils and the wider School community. The trip is one of a number of high-profile trips that the School regularly undertakes, which have included a trip earlier in the year to NASA in Texas and a forthcoming co-educational Netball and Hockey tour to South Africa in Summer 2018.