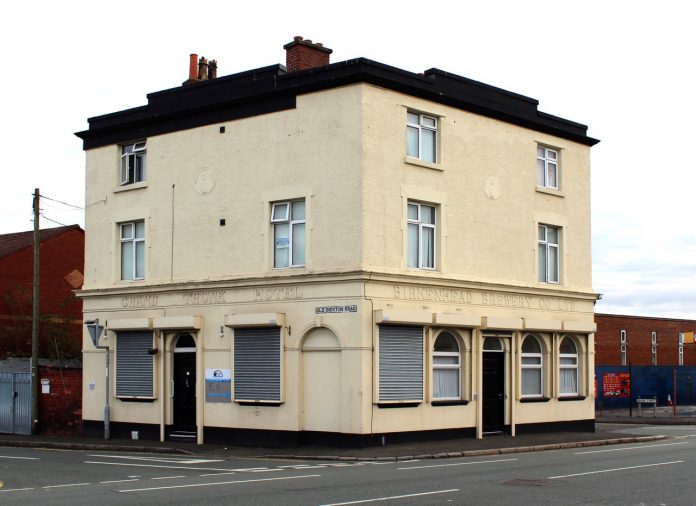 A former pub on Duke Street, Birkenhead which served its last pint in 2013 has found a new purpose by being converted into studio flats for homeless people.

The former Grand Trunk pub has been acquired by a local charity, The Wirral Churches Ark Project and already has 3 studio flats in the building but now aims to develop another floor bringing the number of  flats to six in the building.

The organisation which helps homeless people in the Wirral area has been given almost £36,000 by Cheshire Freemasons’ to enable the conversion to be completed.

Wirral Ark is a local grassroots organisation backed by the local authority working on the frontline of homeless provision in Wirral. Since 1991, they have worked directly with people experiencing homelessness and grown from a temporary night shelter to a commissioned service working 24/7, 365 days a year. Their aim is simple: to break the destructive cycle of homelessness by addressing the personal, social and structural causes.

The project is to provide 3 new units of self-contained studio flats, each with their own bedroom and living space, kitchenette and en-suite, along with an emergency bed space of temporary accommodation. Self-contained units are vital to stopping the spread of disease, and promote dignity and independence.

Freemasons donated £1 million between April and July last year to help those impacted by the Covid-19 crisis, and are now focusing on protecting the homeless, with a new series of donations across England and Wales.

The homeless crisis has been exacerbated by the Covid-19 pandemic, with many people losing their jobs and finding themselves either living on the streets or in unsuitable living conditions.

The funds raised by the Freemasons nationally will help provide safe living conditions, healthcare, meals, and employment opportunities for the homeless; as well as helping protect them from the winter weather, which kills hundreds of homeless people every year. In addition, Freemasons will be volunteering their time at 26 homeless support organisations.

The grant from Cheshire Freemasons comes through the Masonic Charitable Foundation, which is funded by Freemasons, from across England and Wales.

Elliot Jessett of Wirral Ark said: “The grant from Cheshire Freemasons will fund the capital costs of converting Wirral Ark’s former head office into 3 self-contained flats for people experiencing homelessness. Housing is frontline defence to Covid transmission, which has created an urgent need for Covid-safe self-contained housing for homeless people. The flats will provide a positive environment for people to recover in their journey to a stable and independent future”

Harry Wright, a senior Cheshire Freemason said “We are very pleased to be able to assist Wirral Churches Ark Project which will help homeless people directly and for the long term”.

As part of the national effort, Freemasons will be providing support to homeless people across the country:

More than 40,000 homeless people will be provided with essentials, transport and support, as well as help accessing services such as counselling, healthcare and benefits;

Almost 197,000 meals will be provided to homeless people;

Approximately 600 people are being given employment and training opportunities;

Nearly 1,400 individuals are being provided with accommodation and support.