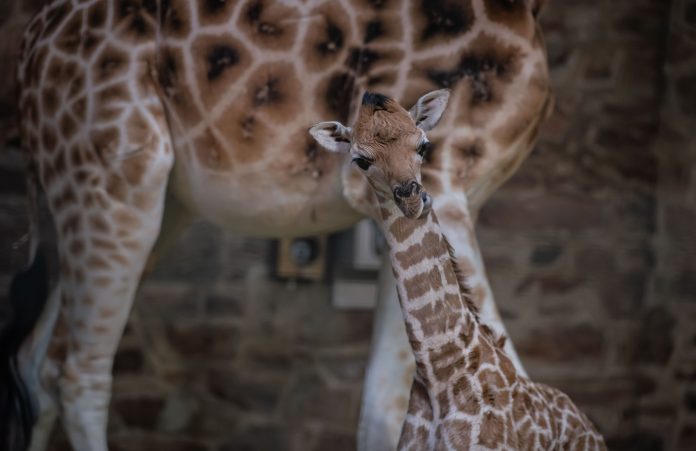 Zookeepers at Chester Zoo have released CCTV footage showing the incredible birth of an endangered Rothschild’s giraffe – as well as his adorable first steps.

The leggy new arrival was born to 12-year-old mum Dagmar at 11:20am on Tuesday morning.

Giraffe experts at the zoo monitored the three-and-half-hour labour live on camera as Dagmar dropped her new calf six feet to the floor, landing on a bed of soft straw.

The healthy male youngster, who is yet to be named, was then up on his feet and suckling for the first time just over an hour later.

“When a giraffe mum drops her calf to the floor it can look a little dramatic – but it’s not such a long drop when the baby is six foot tall. Nevertheless, to see the birth and the very first steps of an animal as rare of the Rothschild’s giraffe is an incredibly special thing.

“Dagmar is so far being the model mum. She’s staying close to her calf and letting him suckle, which of course is vital in these early few days. The milk is filled with important nutrients like colostrum, which will help the little one to grow and reinforce an inseparable bond between mum and baby.

“This new arrival is a special addition to the international breeding programme for this endangered species, which is working to boost numbers in zoos and safeguard its future.”

Rothschild’s giraffes are highly threatened in the wild and have suffered a 90% decline in numbers in recent decades, making them one of the world’s most at-risk mammals. Estimates indicate that fewer than 2,650 now remain across Africa.

“Giraffes are currently experiencing devastating declines in the wild but experts from Chester are right in the thick of the fight to help to protect Rothschild’s giraffes, one of the rarest subspecies, in Uganda’s Kidepo Valley National Park.

“The constant threat of habitat loss, along with Africa’s ongoing poaching crisis, continues to put these magnificent animals at risk of extinction. There is good news though – our teams have been working to support The Giraffe Conservation Foundation and Uganda Wildlife Authority for a number of years, helping to monitor, track and protect the giraffe population in Kidepo and we’re very happy to report that numbers are slowly increasing. It’s an incredible effort by all involved to help prevent extinction.”