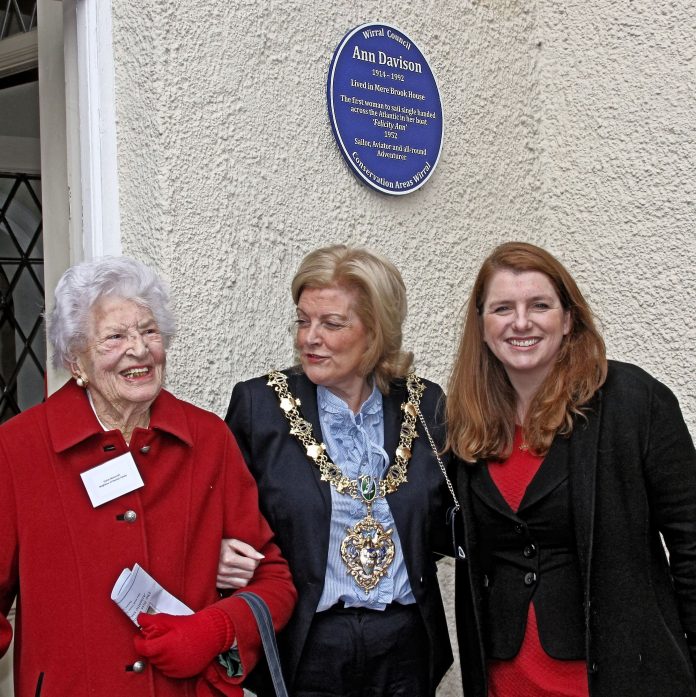 A Blue Plaque to recognise the remarkable Ann Davison – the first woman to sail the Atlantic single handed – was unveiled by the Mayor of Wirral at MereBrook House, Thornton Hough.

Among over 50 guests was Wirral South Member of Parliament, Alison McGovern who paid tribute to “a remarkable woman who was ahead of her time and who had dared to do what other woman only dreamed of doing at that time.” Representatives also came from the local Dee and Mersey yacht clubs, the Royal Yacht Association, Merseyside Maritime Museum and officers and councillors from Wirral Council.

Members of Ann’s family had travelled from all over the United Kingdom to be present at the ceremony to honour their relative. A very special guest was 92 year old, Dulcie Morecroft, who as a small child living on the airfield remembered Ann in her white flying suit. “She was a part of my childhood” Dulcie commented. Ann had lived at Mere Brook House from 1939 after she and her husband had been required to move from Hooton Airfield where Ann was a pilot. The airfield had been requisitioned by the RAF for wartime activities. It was in 1952 that Ann had set out in her 23ft wooden sloop Felicity Ann, to conquer the Atlantic, the ocean that had already drowned her husband. She sailed first to France, then to Gibraltar and finally to the Canaries before making that big jump across the ocean to Barbados. It took her 65 days during which time she was out of all contact with land.No GPS, no mobile phones, no two-way radio and no back up crew in those days! Ann made landfall in Dominica on 23rd January 1953.

David Allan, vice chairman of Conservation Areas Wirral, who organised the Blue Plaque scheme in Wirral said “Ann Davison set the bar for Ellen McArthur and others who had followed in her footsteps. Hers is an inspirational story of one woman’s grit, courage and sheer determination. Although Ann died in Florida in 1992; her boat, Felicity Ann survived and has been completely refurbished as a Community Boat Building project in Seattle USA where it will be used to introduce young American ladies to the delights of sailing.”

‘Loads’ you need to know about travelling on the M53 this...