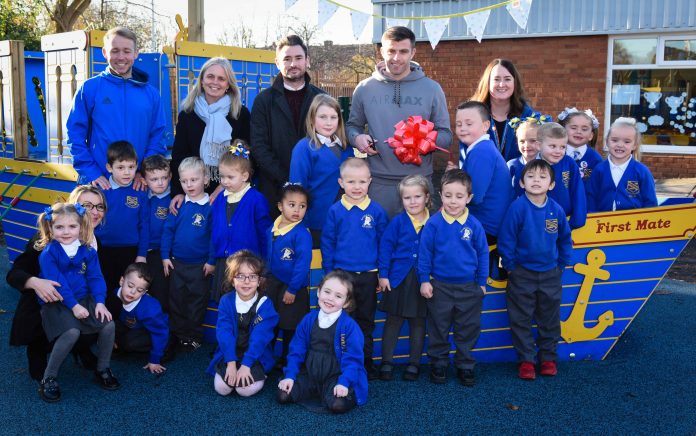 The tough tackling midfielder, who has led his side into the play off positions this season, gave a rousing team talk when he attended the official opening at Our Lady and St Edward’s Catholic Primary School in Birkenhead. And he praised young members of the Good Samaritans who have worked hard to help fund the new £25,000 pirate ship playground for their early years pupils.

Liverpool-born Steven Jennings thought the children’s super new facility scored highly and praised the children for achieving their goal. He said: “I’m delighted to be at the opening of Our Lady and St Edward’s new playground. It’s a fantastic facility which I’m sure will really benefit the children who use it. Everyone involved in the fundraising activities should be very proud of themselves because they’ve played a big role in making this happen and I’m sure the children will really appreciate it.”

Spread over a large area laid partly with tarmac and partly with grass, the playground features a pirate ship and a terrific play tower from Creative Play’s newly launched Jigsaw range which allows clients to piece together their own tower from 30 different components suitable for different ages and abilities. There are also balance beams, stepping logs, playhouse, picnic benches and a sandbox.

Jim Gambino from Creative Play oversaw the project. He said: “We met with the school back in June with a view to developing an early years play area and talked through some ideas about what kind of play features they wanted. What we came up with was a climbing structure, including a play tower from our new Jigsaw range, with a pirate ship feature to encourage imaginative role play and exploration. Once the designs were in place, the installation of the equipment took 14 days. It was great because we started with a blank canvas.”

Jim said around 10 people from Creative Play worked on the entire project from start to finish. He added: “The wide range of play features encourages development, creativity, imagination, exploration and role play as well as physical movement skills. To us, every child matters and every child is different so we promote inclusion and make sure no child is left out. We appreciate some children are more active than others, and some prefer to express themselves differently through role play, so what we have created ticks all the boxes because there is a wide range of equipment and something for every child to enjoy.”

The new playground marks a significant investment in the school on Price Street, after their purchase of a former family centre over the road. The site has now been transformed into an early years base for pre-school and reception pupils aged three to five, but assistant head teacher, Sarah Parry said the playground is the “jewel in its crown.”

She said: “Because our school has grown so much, we purchased the old family centre building over the road that had lain empty for two years. The school came together to raise all the money with the help of our Good Samaritans Team, so it’s great that the children in the team have something tangible to show for their fundraising efforts. What we have now is a fantastic play area for the children to enjoy, plus it’s the first time we’ve ever had grass. It was so important for us to provide an amazing play area to enhance the learning experience for our pupils. We are all blown away by how fantastic it is.”

Ten-year-old Alice Hanna, a founding member of the Good Samaritans Team, whose mission is to help people at home, school and in the wider community, said: “We did a sponsored walk and some of the money we raised went towards the new playground and some went to The Catholic Children’s Society. The little children really like the playground and have lots of fun so it’s nice to know that we helped that happen.”

Jim, who has worked as a sales manager at Creative Play for more than four years, added: “This was a big development and a very good project to work on, it was great to get the school’s input and create exactly what they wanted. It’s lovely to hear that the children are enjoying it and that it’s making a difference to their learning. That’s what I do this job for.”

Vintage prints and costumes at the Lady Lever Art Gallery

OMD return to the Wirral for the Food, Drink and Music...