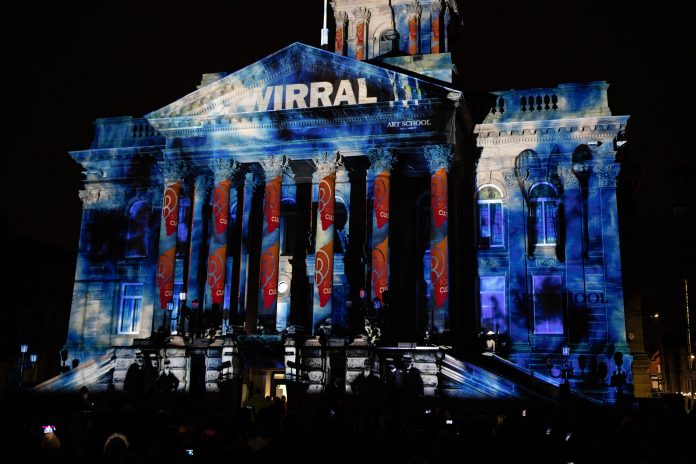 As Wirral’s year as Borough of Culture for the Liverpool City Region reaches its halfway point, we’re taking a look back at the last few months of this extraordinary programme which has brought us some unforgettable cultural and sporting moments and casting an eye over more highlights to come.

The year began with the spectacular Animated Square. Featuring a dazzling projection onto Birkenhead Town Hall, the stunning show captured the story of the town and Wirral as a place. Circus performers and local choirs wowed the crowds, creating a festival feel in Hamilton Square.

Radio Local brought a radio show with a difference to Liscard over the Easter weekend. Performers Hunt & Darton led a 12-hour radio programme in the town, with members of the local community sharing stories and playing games on-air, as the show took over Radio Wirral for the day, with guest slots on BBC Radio Merseyside.

Wirral’s shipbuilding heritage is firmly in the spotlight during the Borough of Culture year, as the borough takes its place on the world stage as the birthplace of the RRS Sir David Attenborough. Last month saw the launch of Made of Iron – a strand of cultural activities and projects celebrating our maritime connections, including exhibition Six Vessels at the Williamson Art Gallery which runs until Sunday 22 September and delves into the stories behind six Wirral-built ships.

The Witching Hour spellbound 7,000 visitors in Birkenhead Park in May. Created by renowned theatre company Periplum and developed in partnership with Hull’s Absolutely Cultured, the show brought three nights of spectacular theatre and wonder to the park. Weaving together stories from Birkenhead and Hull, The Witching Hour explored local myths and legends and highlighted connections between the two places. Featuring jaw-dropping effects and pyrotechnics alongside beautiful storytelling, it was unlike anything seen in Wirral before.

Hamilton Square was transformed into a racetrack for Wirral’s first ever visit from the OVO Energy Tour Series. 10,000 spectators turned out in the glorious sunshine to see some of Britain’s best male and female cycling talent including Paralympic legend Dame Sarah Storey and five-time world champion Ed Clancy compete at high speeds around the historic square.

The first weekend in June welcomed the return of the ever-popular River Festival in New Brighton. The waterfront came alive with seaside fun for all ages, including giant sand sculptures, a real-life mermaid, a massive inflatable whale and pavement chalk art which stretched all along the front.

Now a season of Art Outdoors has begun. Throughout the summer, art will be appearing in unexpected locations across the borough with pop-up displays and exhibitions. The first is Yan Preston’s Forest – a collection of stunning images by the Sony World Photography award-winner, presented on illuminated boxes in Birkenhead Priory. The exhibition is part of the LOOK Photo Biennial and is a collaboration with Open Eye Gallery.

Looking ahead to the second half of the year, an incredible September awaits, with massive events coming to Birkenhead Park including the all-new Wirral Food & Drink Festival on Saturday 7 and Sunday 8 September, with a rare outdoor performance by the Royal Liverpool Philharmonic Orchestra in the park on the Saturday evening. September will also see Britain’s biggest cycle race, the OVO Energy Tour of Britain, coming to Wirral for the first time. On Wednesday 11 September, some of the biggest names in cycling will start and end their day in Birkenhead Park, taking in towns and villages including Port Sunlight, Hoylake, Heswall and New Brighton along the way, as well as venturing out of the borough towards Chester and Broughton.

Keep an eye out for more announcements coming soon about Constellations – a series of creative and cultural events around the moon and stars across the peninsula. The year will go out with a bang with the return of fireworks extravaganza River of Light in New Brighton.

For more information about all Wirral Borough of Culture events, go to imaginewirral.com

Mamasan Restaurant and Bar to open in Liverpool on May 17th