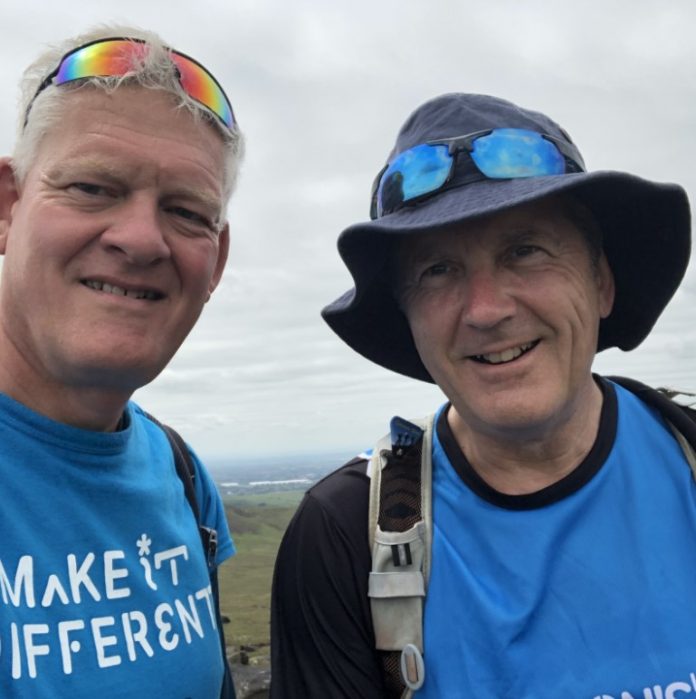 Monday 14 March 2022 – A man from Wirral, Merseyside, is preparing to walk 200 miles with his childhood friend, to raise vital funds for the charity Parkinson’s UK.

61-year-old Robert Stubbs who works as a Teaching Assistant at Ellesmere Port Catholic High School, was diagnosed with Parkinson’s in October 2017. He will be walking from St Bees on the Irish Sea coastline to Robin Hood’s Bay on the shores of the North Sea from 2 April to 18 April, celebrating World Parkinson’s Day on his way (11 April). Accompanying him will be his childhood friend Nick Heath, an experienced trail walker. The duo are hoping to trek around 200 miles through the Lake District, the Yorkshire Dales and the North York Moors.

Parkinson’s is the fastest growing neurological condition in the world, and currently there is no cure. It affects around 145,000 people in the UK, including 15,256 in the North West of England. There are over 40 symptoms, from tremor and pain to anxiety. Robert currently experiences tremors, aches in his right arm and insomnia.

Robert said: “It was in 2009 whilst I was walking, that a friend observed my right foot was dragging and my balance was off. Since my diagnosis, I have maintained a positive attitude and set myself new challenges which will stretch me. Before I was diagnosed with Parkinson’s, I was a keen walker and climbed to the summit of Mount Kilimanjaro and Everest Base Camp. Exercise has become even more important for me as I fight this debilitating condition and try to keep active.

“It was at a coffee shop a year ago that I read Alfred Wainwright’s ‘A Coast to Coast Walk’ and asked Nick if he was up for tackling it with me. I couldn’t resist taking up the challenge and it will be tough, but then what challenge isn’t?

“I am really looking forward to taking on this challenge because it’s for a great cause and I want to make a difference for people living with and affected by the condition. I am currently taking part in research to find better treatments and a cure for Parkinson’s. I’ll be grateful for any money raised as it will go directly to Parkinson’s UK to fund groundbreaking research. It could lead to that breakthrough we’re all hoping for.”

Parkinson’s UK is the largest charitable funder of Parkinson’s research in Europe, leading the way in driving better care, treatments and quality of life for those with the condition.

“We are so grateful to Robert and Nick for taking on this incredible challenge for Parkinson’s UK.

“With more than 40 potential symptoms, Parkinson’s can devastate lives. We’ve made huge breakthroughs in the last 50 years, but there is still no cure and current treatments are not good enough. Fundraisers like Robert and Nick help us to drive forward the groundbreaking research we need to transform the lives of people affected by the condition.”

Robert is hoping to raise £3,000 for Parkinson’s UK. To sponsor him, visit https://www.justgiving.com/fundraising/robert-stubbs2

Inside Chester Zoo’s stunning new wedding venue that has availability for...