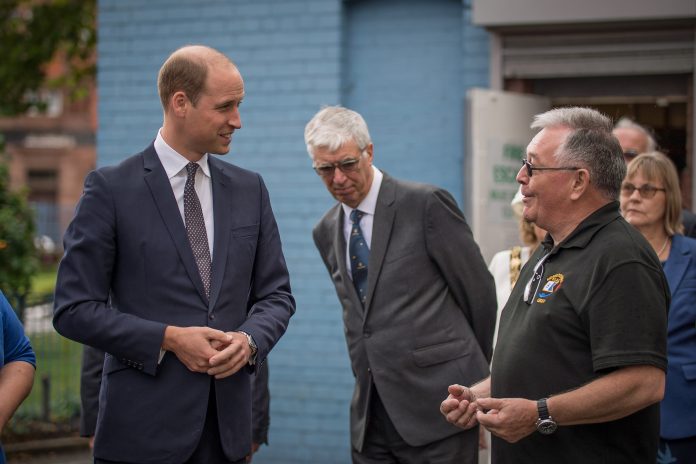 Geoff Oldfield, 69, a member of the Merseyside branch of the British Sub-Aqua Club (BSAC) recounted the story of the SS City of Brussels during His Royal Highness’ visit to their clubhouse and training pool in Seacombe, Wallasey.

The Duke was on a tour of the Wirral and made time to visit Mersey Divers, which is part of BSAC – the UK’s governing body for scuba diving and snorkelling. The Duke took over the BSAC Presidency from his father The Prince of Wales in May 2014 and followed in the footsteps of both his father and grandfather to become the third generation of the Royal Family to take the helm. Geoff explained to His Royal Highness that the Glasgow built passenger ship sank in January 1883 after being struck by another vessel near the end of its voyage from New York to Liverpool, resulting in the tragic death of 10 of the 167 people on board. The SS City of Brussels had encountered thick fog and the captain brought it to a stop to wait for the weather to clear, but a short time after a new cargo ship called the Kirby Hall, which was on its maiden voyage from the River Clyde to Bombay, collided with the starboard side of the vessel, almost cutting it in two. The ship, owned by the Inman Line shipping company, had launched in 1869 and in the same year set the fastest east bound crossing of the Atlantic for a powered vessel at 7 days, 20 hours and 33 minutes – a record it held for three months. The wreckage of the fated vessel was discovered in 1984 and quickly became a popular destination for scuba divers, though it wasn’t until 1998 that Geoff and his fellow members decided to embark on a hugely challenging mission to recover one of the ship’s cannons and help preserve her ill-fated story for future generations. The Duke of Cambridge called into the Merseyside Sub-Aqua Club base to chat with members of different ages and listened with great interest about the lengths that have been taken to preserve the cannon, which is on display in the clubhouse. Commenting on HRH’s visit, Geoff said: “He was very friendly and very open, and extremely interested in our expedition to raise the cannon. He was impressed at how we had managed to do five dives in 45 minutes to raise the cannon. I also talked to him about the wreck itself and explained how 10 people lost their lives, when the ship sunk. Today has been a total pleasure – a real honour.”

Geoff, from Moreton, Wirral, said that once the club became aware of one of the ship’s two cannons being amongst the wreckage they were desperate to recover it. He explained: “It was one of our most popular wrecks to dive in Liverpool Bay because it was so substantial. We’ve been diving it for decades. One of my colleagues mentioned that they had seen a cannon and we were really keen to recover it but knew this was going to be a big task. We also needed to learn how to conserve and preserve the cannon if we managed to recover it. We knew if we didn’t do anything it was quickly going to crumble into dust because it was made of cast iron. We approached Merseyside Maritime Museum for help and they were only too pleased to show us about electrolysis and conservation.”

The 14-strong team working on the project now had to put together a plan to recover the cannon from the wreck, which was going to prove a major challenge given the strong tidal movement in Liverpool Bay.Geoff, who has been diving for 43 years, said: “You probably get about an hour of still water here so we had to get it done very quickly. When you think of the amount of tasks we had to do and the fact there was five separate dives, to complete the lift in 45 minutes was beyond our wildest dreams. We did the dive in March 1998 and I remember it was very calm with good visibility. They were perfect conditions. Once we’d recovered the cannon it took us six hours to tow it back to New Brighton. We’d come back in with the tide and were in darkness by the end of it. It was a long day! The wreck is very special to scuba divers of the North West so recovering the cannon is something we’re very proud of. It was a really good expedition and afterwards we made sure we declared the cannon to The MCA Receiver of Wrecks.” Work then began on trying to conserve the cannon- a process which took more than six years to complete.

Geoff explained: “A special tank was built for the cannon but unfortunately as it was made out of steel originally it corroded due to the electrolysis and sprang a leak. The tank was then lined with fibreglass and the electrolysis continued for a little over a year. Then the cannon was flushed with fresh water regularly for a further five years. It was a long process. It is now on display in our boathouse and although it isn’t in pristine condition it’s much better than it would have been if it had been left on the wreck or left untreated. It’s a constant reminder of that important Mersey Divers expedition and it was a pleasure to share it with The Duke of Cambridge.”

To find out more about learning scuba diving skills with BSAC, please visit www.bsac.com or find them on Facebook or Twitter @BSACDivers.