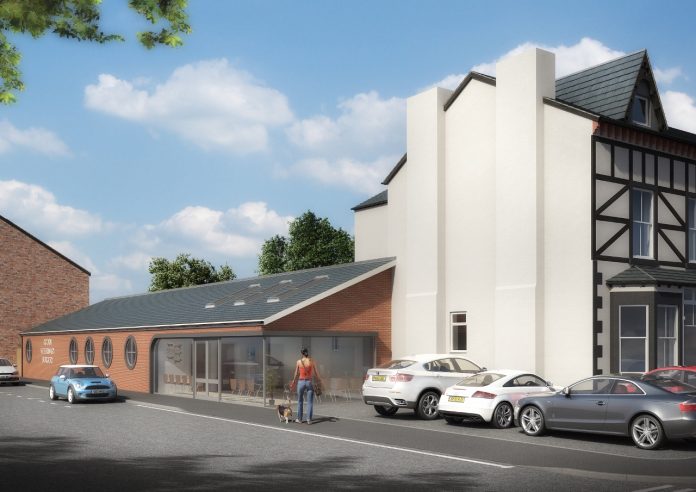 Work has started to rebuild a Wirral veterinary surgery as part of a major modernisation project to create a state-of-the-art facility for pets across the region.

The transformed Acorn Veterinary Centre in Acacia Grove, West Kirby, run by the independently-owned Willows Veterinary Group, will employ 19 people, which will include the creation of two new jobs, and is expected to be completed later in the summer.

The former buildings attached to the end-of-terrace three-storey Victorian town house, which once housed a family printing firm and forms part of the surgery, have been demolished to make way for a modern, glass-fronted 3,000 sq ft single storey building. For the time-being, the surgery has a temporary home at Hillcroft Farm in Frankby Road, Frankby.

The whole team are looking forward to welcoming four-legged clients and their owners to the new purpose-built practice which is being built by local firm JFW Construction of Bebington. The new practice will house three consultation rooms, a double theatre, an imagery suite which will house X-ray, ultrasound, endoscopy and ECG equipment. There will also be a designated feline and canine dental theatre which will also have its own digital X-ray system. The number of parking spaces will double from three to six.

Head Vet Tom McGowan, a father-of-two who lives in Heswall and is originally from Arkansas in the US, said: “The new practice is going to be open-plan and airy with lots of light and high ceilings but it will have a familiar feel with the same team working hard to look after our clients which I think will be really reassuring to them. We are all extremely excited that work is underway. The surgery has been in the local community for 30 years and it is great to be overseeing a project to revitalise it for many more years to come. As a part of Willows Veterinary Group, we are always looking at ways to reinvest and improve facilities for our clients and their much-loved pets. It’s important for our staff team too, that they have a nice place to come and work in and to have something they are proud of.”

Tony Cottier, joint Director of JFW Construction, the construction firm building the new surgery, said: “We have a team of six local lads employed on the site and all the materials we are using come from local suppliers. We are also enlisting the support of a team of Wirral based sub-contractors including scaffolders, electricians and window fitters so this particular project is providing a lot of work for a network of local businesses. Work is well underway now and going well. The finished project is going to look great and be in keeping with the local area. I think people will be really impressed by the finished building.”