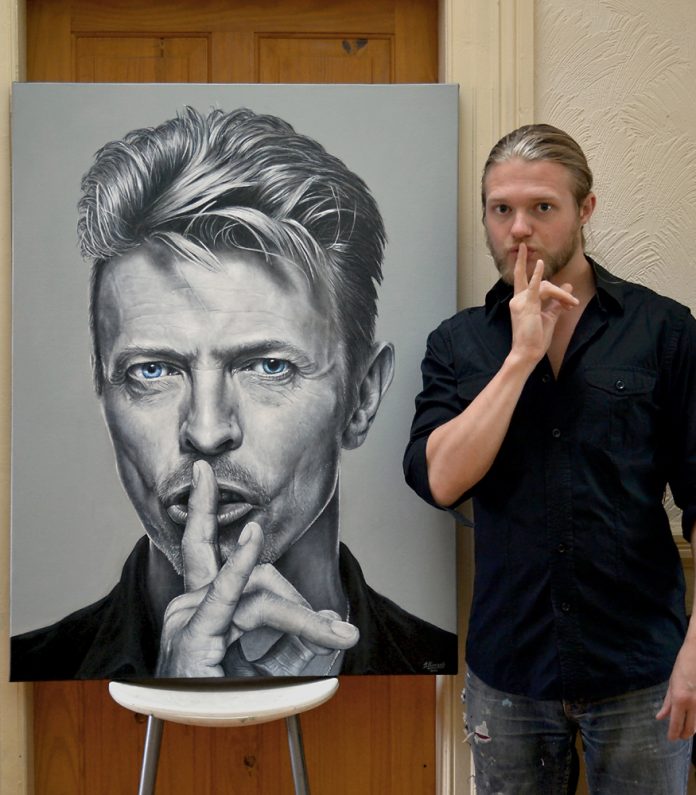 Where did your passion for art come from?
I’ve always been artistic, as a kid I would sit around for hours with my cousin and older brother drawing, often epic stickmen battles across multiple sheets of paper that we’d taped together. I’ve always been encouraged by my parents, family and teachers, so they’ve helped nurture any natural artistic abilities I had and give me the confidence to do it full time.

You trained in art including painting, drawing and sculpture – which genre is your favourite?
I don’t particularly have a favourite, as I like to try everything and push my skill base, but I probably specialise more in pencil drawings and oil painting. Sculpting is a lot of fun, whether in clay or stone, but it’s not often I get to do it as it’s very messy and time consuming, requiring a lot of space and a large budget because it’s more specialised work.

When you start on a new commission to paint a picture, how do you choose which medium to use?
I’ll decide the medium with the client based on a number of factors such as size, style and budget. The main point is usually what aesthetic look they’re looking for, it is high detailed and realistic, or more painterly with visable brush strokes. Other factors include the varnish, an oil painting will need to be left for 6-9 months to full dry before the final varnish can be applied and require a high gloss varnish to give it depth and bring out the colours. Where as acrylic paintings can be varnished after 24 hours and can have a matte varnish instead.

Have you worked on any notable projects or for any notable clients?
Yes, in 2011 my brother and I produced 5ft tall heads of Prince William and Kate to celebrate the Royal Wedding. A CIC in Chester makes giants for community events and we were asked to created fibreglass busts for their royal giants. In 2013, I painted a retirement portrait of Jamie Carragher for his 23 Foundation. It was meant to be auctioned off for charity but as it coincided with his retirement it was signed by all the players and staff at the Melwood training ground and presented to him as a retirement gift. More recently, I painted a series of canvases and murals at The Viking pub in West Kirby for Simmon Rimmer & the team at Flying Pig and Lobster. All the artwork was of local animals and Viking themed wildlife, which was fun to apint. The murals were done during the day so customers would be watching me and have a chat. The response has been fantastic, everyone loves them! Simon’s favourite is the Raven, but I think I like the badger most.

What do you think is the best piece of work that you’ve done and why?
I have a piece called ‘Storm’, an oil painting of a sunset shining through a storm out at sea. My Dad took a series of photos from his house in New Brighton which I used as the basis. I really played with the colour and light throughout it and tried to push myself. The other piece which stands out is a David Bowie portrait I was recently asked to do. It’s quite large, just over 100 x 75 cm.

Who has influenced your work the most?
My tutor, and friend, Terry McGunigle has influenced me more than I probably know. His guidance into discovering the importance of traditional and classical art has shown me the importance of proper knowledge and training. I often look back to things I used to struggle with and can clearly see I didn’t fully understand what I was looking at, whether it’s anatomy, perspective, light, colour theory or just my technique of painting.

What do you think of “competitive” painting – shows like Sky Arts Portrait Artist of the Year, Landscape Artist of the Year?
I’ve not seen many of them, but I think they do help promote the arts and introduce it to new audiences, which is more important than anything.

How do you relax and switch off?
I play keyboards and used to be in a band, so music is always important to me. I like going for walks, drinks with friends and family, the usual.

To find out more about Joe, visit www.joeforrest.co.uk 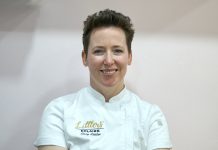 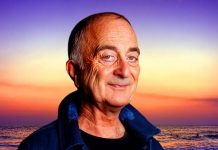 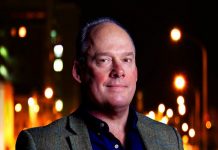