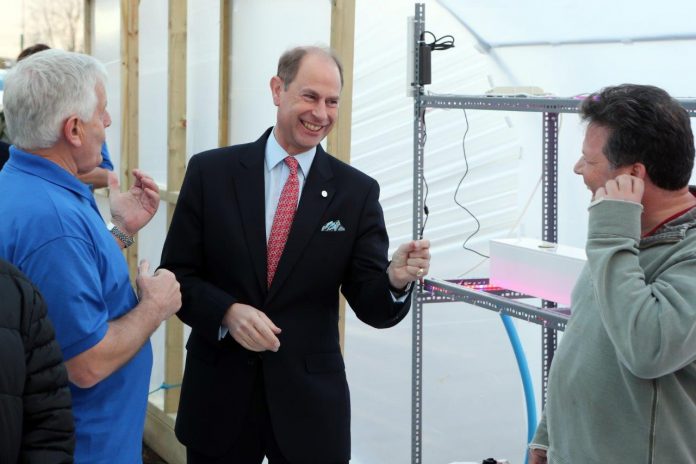 HRH The Earl of Wessex has visited an Ellesmere Port-based charity that works with the unemployed and those suffering from mental health conditions.

The commercial hydroponics unit, the first of its kind in Cheshire, is a method of growing plants without soil by using mineral nutrient solutions in a water solvent.

Plants can be grown with only their roots exposed to the solution. Staff and volunteers at the farm are growing fruit, vegetables and exotic micro greens using hydroponics to order for high end restaurants in Cheshire.

During his visit, Prince Edward was given a tour of the farm where he met staff and volunteers before unveiling a plaque on the site marking the official Royal visit.

The social enterprise, based on Mill Lane in Ellesmere Port, is a working horticulture farm with organic principles which first began operating in 2014. The charity’s main purpose is to create permanent and sustainable jobs for the long-term unemployed by growing and selling fruit, vegetables, salads and herbs to the local community.

It also provides a therapeutic environment for people suffering from a range of mental health conditions, including depression and post-traumatic stress disorder, as well as those with mental and physical learning disabilities.

One of the people helped by the farm and introduced to Prince Edward was 22 year old Chris Jones from Saughall. His place is sponsored by British energy specialist EA Technology, which is headquartered in Capenhurst. 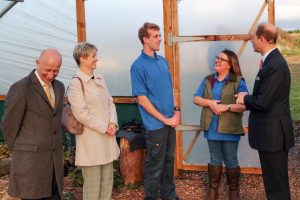 “Chris works at the farm four days a week and it has transformed not only his life, but the life of his family. He has learnt to grow all sorts of vegetables, takes a huge pride in his work and, most importantly, the job has given him a sense of normality.”

“I’m incredibly proud of what our team of staff and volunteers have achieved here. Pretty much every day we are reduced to tears by the gratitude of a client, or client’s parent or carer, who gain so much benefit from spending just a few hours with us. It’s inspiring and it drives us on to Grow Better Lives.”

Since it opened, the charity has worked with hundreds of people of all ages, from school children with severe behaviour problems, CCGs and GPs engaged in social prescribing, social services and the long-term unemployed – helping them through what are often extremely difficult times.