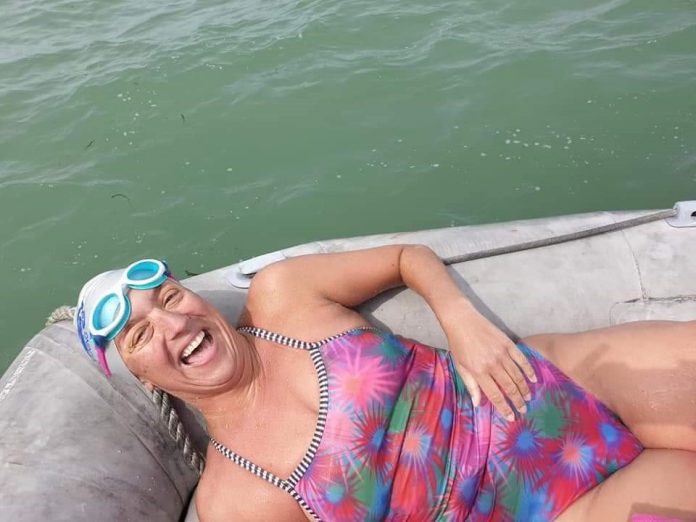 Only 1800 people have succeeded in swimming the Channel solo, and out of those, West Kirby’s Hayley Chapman has become the first Wirral woman to complete the 21-mile swim solo.

Wirral Life found out how she did it.

How did swimming the Channel first come about?

Well I’ve always swam ever since I was a kid and I did competitive swimming as a teenager, but then I wanted to get fit again so I got back in the pool and happened to meet someone there who swam outdoors in the Marine Lake in West Kirby. She said did I fancy coming along with her and so I went along and started swimming outdoors and that was that!

I did a few events and then the following year we were out for my birthday and were looking on Facebook at people who were looking for relay members to do the Channel with them. Now I’d had a couple of ciders… and we thought it was a great idea! This was a four-person relay, so I went on a training camp in the May and met the other girls taking part and ended up signing up for a two-person swim. By the end of that year I’d signed up for my solo swim because you have to book it quite far in advance.

How many people are there swimming in the Channel at any one time?

Well there must be about 14 at any one time. And you have to have a boat per relay!

When did you do the solo swim?

It was in August this year – so Summer! It wasn’t supposed to be until the end of September, but they called for people to see if anyone could do a swim any earlier and I was in a training camp in Cork, so I said I would be free to go from mid-July. It’s just over 21 miles. It’s like swimming a marathon. Luckily there was never any time where I felt like I’ve had enough now, and I want to stop.

How long did it take you?

It took me 13 hours 25 minutes and you don’t stop. You’re not allowed to touch the boat and you only really pause for the people on the boat to throw you a bottle of feed.

Feed? What’s in that then?

Well it’s this delightful mix of carbohydrate powder which I usually have with Vimto or Ribena. It keeps your energy levels up. I mean I had all these big plans of having marshmallows and peach slices but that didn’t happen. I think I only had one marshmallow!

It also took place at night, so I was swimming through the night. I prefer swimming in the dark. I find it really relaxing. There’s something very tranquil about it. Some people hate it, but I really like it.

Do you get cold?

It wasn’t too bad when I did it, partly because of the time of year, and also because I’d done a lot of training outdoors. I mean I didn’t swim in the pool for at least four months in the run up to the swim, so I was pretty acclimatised to the conditions. I didn’t want to spoil that by getting in the nice warm pool!

Who was with you?

I had a few friends with me, they were on the boat and they keep you going and make sure you’ve got someone watching you at all times. They also sorted all the feeds out!

So, what’s next for you?

There are so many different channels and lakes that I’d love to do. I’d love to go to Geneva which is twice the length of the Channel and I’d love to do Zurich and I’m trying to find about Menorca to Majorca – or the other way around! If money wasn’t an object, then I’d love to do more, but this basically becomes my holiday for the year. In my day job I run a swimming school so hopefully I’m inspiring them to think that they could achieve these things themselves in the future.